Thanks for your support

On Thursday October 17th, our Fundraising Event was held: a moment that gave us joy, that moved us and that made us feel part, once again, of the adequate housing cause in Argentina.

Thanks to the support of those who joined us, we surpassed our goal, but most importantly, we reaffirmed the support and interest of the people and institutions who join us in our mission: building a world where every person has a decent place to live.  How difficult it is to access an adequate house! (In this newsletter, we will tell you the story of Cintia Santamaría and her long road to enter the Seed House project in Bahía Blanca). Sadly, there are so many who, however hard they try, never find such an opportunity.

That is why the trust and support of those who join us gives us confidence that we can do more and with a greater impact, but mostly, it reconfirms that people are willing to get involved in the solution.

During a beautiful and rainy evening at the Latin American Art Museum of Buenos Aires (MALBA), we enjoyed the music of the Colón Theatre tenor Eduardo Bosio and an exclusive tour of Leandro Erlich’s exhibition, Liminal.

The most moving moment of the evening was the recognition of our Honorary Members: people who support our organization over the years in significant ways. On this occasion, the following members were honoured: Adriana Berra, Connie Ledesma y Leo Hernández. The moment was hosted by Graciela Adán, together with Laura Pellizzatti, Cecilia Mairal and Dani Mintzer, all of them members of this beloved group that is so close to HPHA.

Very special thanks to:

We must do more for our mission. Thank you for joining us and until the next time. 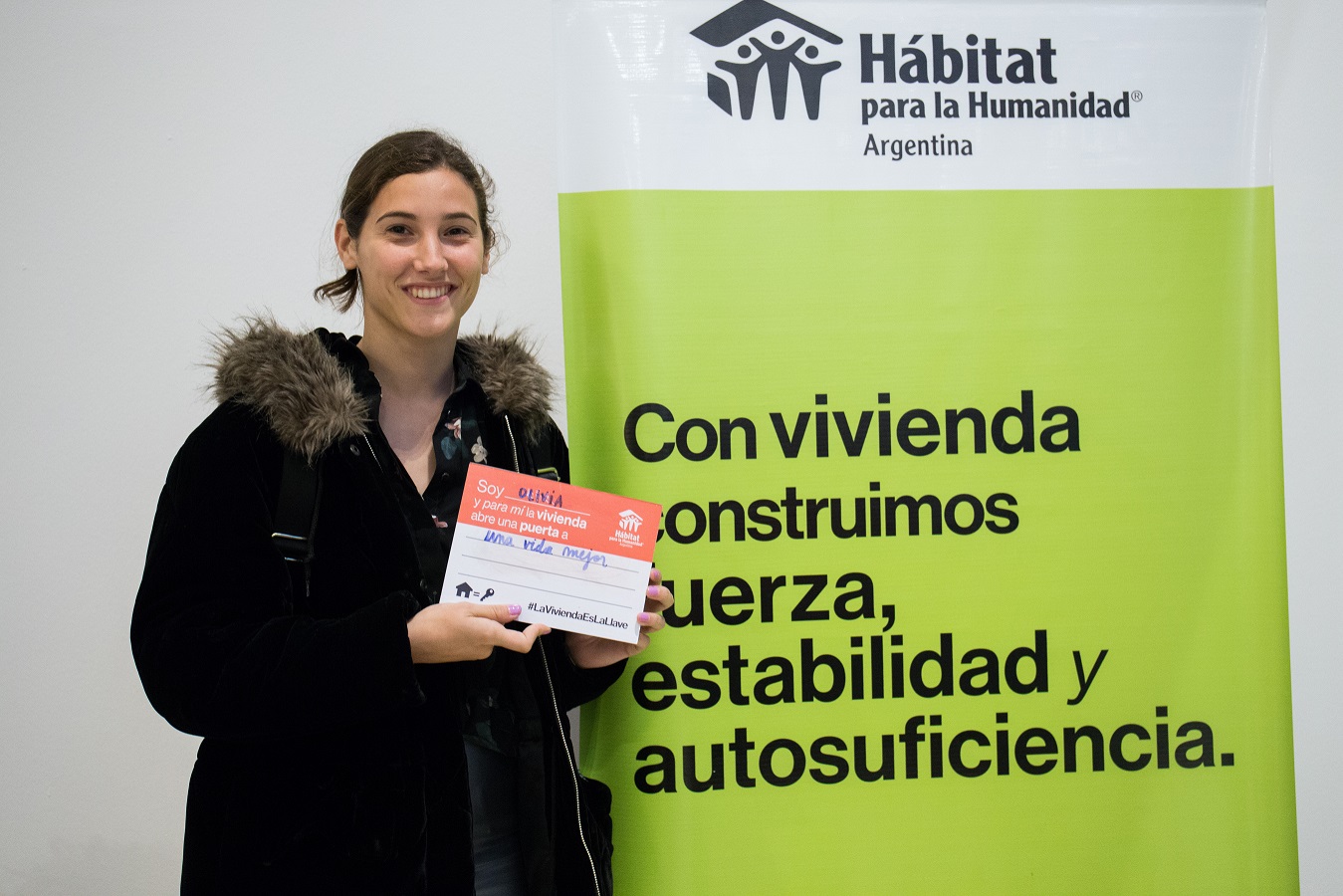 Planting a tree, improving the habitat

We started a tree planting program at Barrio Los Ceibos, in the framework of a community activity to mobilize the neighbors and the volunteers.

The main goal of the activity is to reduce and mitigate the effects of floods, to improve the quality of the soil and the environment, as it increases the supply of oxygen to the planet. It has been proven that vegetation possitively affects air quality in the suburbs and the city. Moreover, it allows the creation of new resources for the community and new abilities as well, as neighbors get interested in the activity and become active players in the improvement of their own environment.

The tree planting program was proposed as a voluntary activity for the neighbors, that included a tree as a gift for each house and a volunteer to help them plant it. The training previous to planting gave answers to any doubts about the process, as well as its benefits, and it increased the neighbors’ interest while allowing them to get to know each other. 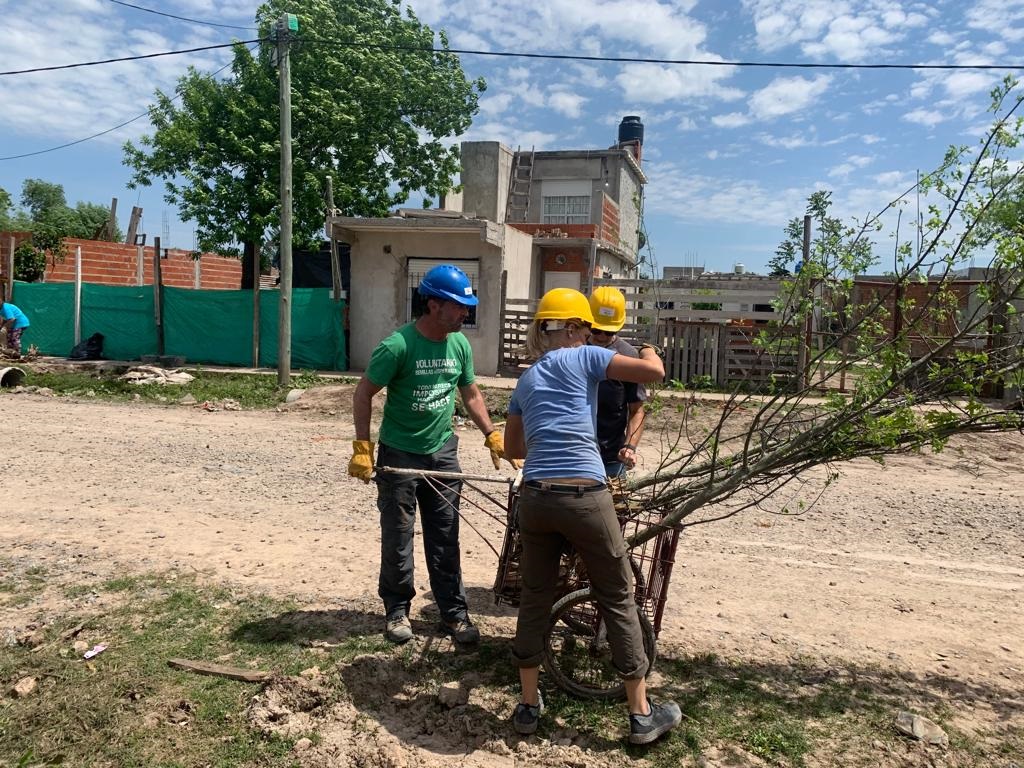 The reasons why we offer planting trees in the neighborhood’s sidewalks include:

Last month, two teams were sponsored by the company Cognizant, whose employees worked together with a Global Village team and the neighbors, and helped carry out all the tasks related to this activity. Afterwards, they showed great satisfaction with the work done.

Two years ago HPHA helped build an evacuation route for the low land part of the neighbourhood, and the trees were planted alongside this route.  During the last flood in Los Ceibos, with more than one meter of water, not only did the trees resist the water but they also worked as a guide for the neighbors to circulate without any risk of electrocution.

These planting days weren’t isolated actions: They are part of a Program that we will implement in the medium and long term. Thus, we are now trying to find donations and contacts with partners to help this project grow in a sustainable way.

“Having your own house changes your life” 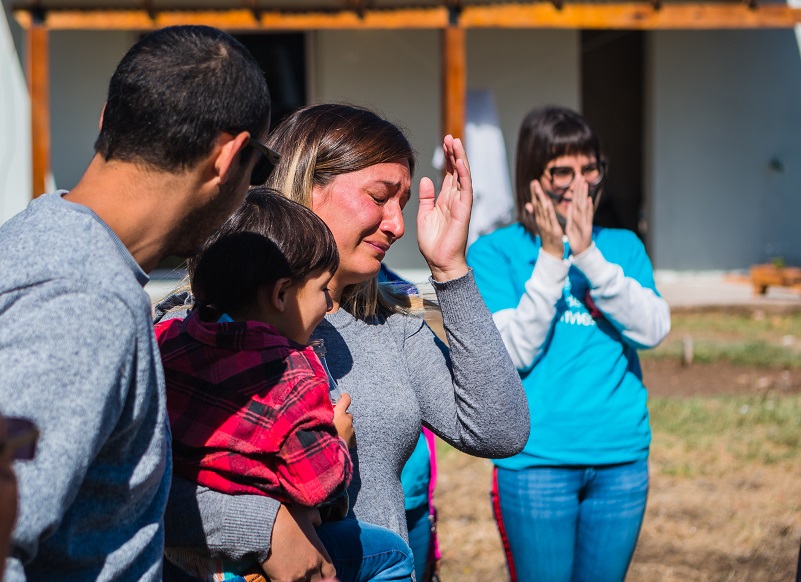 Cintia and Martín have been together for 10 years now and both were born in El Saladero. They are the parents of Valentín, who is already 2 years old, and they both have different jobs with informal incomes. They have had this land for five years now. There they used to live in a tinder and wood house, an old train wagon that they recycled with great effort and turned into their house.

Always with the illusion of being able to build there, the family took an active part in the Workshop Sessions and the community activities from the moment that HPHA begun working together with DOW Argentina, three years ago in Bahía Blanca. With much consistency and hope, they applied for a Seed House in three different occasions, and it was in December 2018 that they got the news that they had been chosen.

After the inauguration of their new Seed House, last October 18th, Cintia recalled: “We got to know Habitat three years ago. We were just a few, because people didnt believe in it. You are told about the project and you think: it cannot be true. You need to see to believe. Four families had applied, my sister Silvana’s family was one of them, and they were selected. I decided to keep trying, I wouldn’t stand idly. We waited one more year and then I applied again.

I took the one-month workshops that are required and I was once again pre-selected, together with Carolina Salazar’s family, who was finally chosen. I was happy for her, because I knew that she really needed it for her children. The third time, I said I wasn’t going to apply because I didn’t want to get my hopes too high, but Marina (member of the HPHA team) encouraged me, and we were selected!

In December we signed the contract and by the end of February 2019 the Ground Breaking took place and there begun the self-building process of the house that was recently finished and is to be inaugurated on Friday October 18th 2019 as all of the stages have been completed. It was a year full of emotions. After laying the foundations, one week later volunteers from the United States (Global Village Program) came and worked in our house. When they got here we only had the foundations, but by the time they left all the walls were finished.”

When she has to think about who she would like to thank, Cintia mentions the volunteers, the Dow and Banco Patagonia work teams, and her own family, without which she could not have lived this change in her life.